Archive for the tag “ignis fatuus” 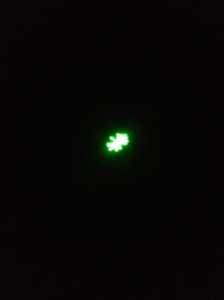 Do you see the mysterious, glowing light in the picture? That’s me!

Like a puppeteer of luminescence, I got to work the Tinkerbell light in a community theater production of Peter Pan. I caused Tink to torment Wendy, flirt with Peter, and bounce around the stage with giddy glee. Although Tinkerbell, a fairy, might count as a will-o’-the-wisp in only certain cultures, she shares something in common with will-o’-the-wisps all over the world – they are mysterious and mischievous spirits embodied in flashes of light.

THE WHO, WHAT, AND WHERE OF WILL-O’-THE-WISPS
Will-o’-the-wisps usually show up in nature, not on community theater stages. They tend to appear in the countryside, often in boggy, wetland locations. In South America, they feature brilliantly (yes, pun intended) on the dry grasslands called the Pampas. But if you see them, beware, for when they appear it is usually to either foretell your death or lead you astray and get you lost, lost, lost.

Sometimes the lights are static, like floating orbs just inches above the ground. Sometimes they fly away due to sound or movement. But these eerie lights are also known to travel at high speed when they rush madly toward a lonely traveler (I am curbing the temptation to say they go ‘at the speed of light’).

So who are they? Well it depends where you live. In Sweden, they are the ghosts of unbaptized children who want to lead you to water so they can remedy their situation. In Germany, they are some form of a forest spirit on a walkabout with an unseen funeral procession. Uruguayan lore suggests that such lights can be the ghosts of dead cows. In America and the UK they are the souls of the not so dearly departed whose lifetime of evil antics cost them admission to heaven and hell (you’ve got to be pretty naughty if the devil doesn’t want you). Since they cannot get into the ever after, they are condemned to walk around in the in-between, carrying hellfire in a lantern, forevermore. Oh, and the lost soul is often called Jack, so if you ever wondered where the term jack-o-lantern came from…

A WISP BY ANY OTHER NAME AND OTHER COOL INFO
Will-o’-the-wisp is not the only term that describes this ghostly phenomenon. Like plants, it has common names and a Latin name. Some of its common names are so delicious they would earn A’s in a college English class – ghost candles, hinky punk, witchfire, Joan-in the-Wad, and fire demon are only just a few of them. The Latin name, ignis fatuus, which means “the foolish fire,” could have been a Hogwarts spell (or maybe it was, HP fandom, get commenting).

So, if you follow the ignis fatuus, you are a fool, right? But then again….

In certain parts of South America, these creatures are called La Luz Mala, or the Evil Light. In Argentina, they are color coded. A white light is a good omen. You can follow it to find gold. Yay. But if you see a red light, it is the devil, out doing nasty business. And it is more likely to do nasty business on August 24th, St. Bartholomew’s Day. That could be a good thing to know.

In Uruguay you can prepare yourself for an encounter with La Luz Mala. First, say a prayer. Next, bite your knife case (I really don’t know if I translated that one properly or if it is idiomatic, but I do so love the image). Third, if worse comes to worse, you can confront it with a steel blade. I’m not sure what you do with it, perhaps just displaying it works wonders, like crosses and vampires.

WISPY SCIENCE
Science has weighed on this too. One theory is that the lights are marsh gas, another that they are electromagnetic events. But scientists have also been attempting to recreate them in labs in order to understand what causes them. Chemical cocktails have been mixed to produce hot, gaseous lights. But ignis fatuus are cool lights. Further experiments have yielded cold lights, but they end up being the wrong color. Scientists, persistent as Goldilocks, still strive to get it ‘just right.’

Alas, my Tinkerbell light cannot be part of this luminous group of will-o’-the-wispies. Ignis fatuus can be blue, white, gold, red… but never, ever green. That puts Tink and me in a category all by ourselves. 🙂