C is for Cardiff Giant 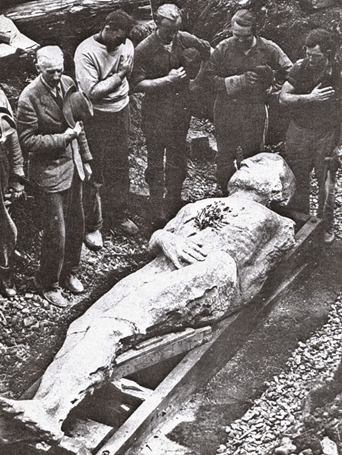 One of the greatest hoaxes of the 19th century happened right here in New York. Workers in Cardiff, NY came upon a shocking discovery while digging a well on William “Stubbs” Newell’s farm – it was a giant man.

Some people thought it was a petrified human of gigantic proportions from long, long ago. Others – including some experts – thought it was an ancient stone statue from the time before the native people arrived. But it was nothing but a giant hoax. Literally.

Even after word of the hoax got out, people still came in droves to see it. P.T. Barnum built a replica of the Cardiff Giant and toured it around the country, charging quite the fees for viewings.  And people paid to see a copy of a fake.

When I think of the fake things that people flock to see now – like the world’s largest swing in Nebraska,  the world’s largest candle in Indiana, and much of what we view on social media – I realize that humanity’s naivete or our need for camp is not unique to the 21st century or a byproduct of our lives today. The good, the bad, and the ugly of human nature endures the test of time.

When we pay for the privilege to ogle at nonsense, do we also pay a higher price in other ways? Share your thoughts below!

2 thoughts on “C is for Cardiff Giant”